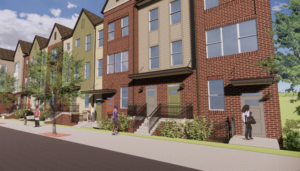 Nestled near the Downtown Mall in the bustling heart of Charlottesville, Virginia, stands a community of 150 families called Friendship Court. Echoes of children at play bounce across the buildings in between the sounds of excavators and delivery trucks. Construction workers and engineers are up early, working to build not only new homes, but the foundation of a new chapter for this community.

Many others are working alongside the builders to bring the vision to life. The Piedmont Housing Alliance launched the equitable redevelopment project in 2018, bringing together many partners from the local, state, and federal levels, and working tirelessly in collaboration with current and former community members. With funding from Virginia Community Capital (VCC) and others, the first phase is one of four that will span over the next seven years.

There have been many chapters before. Once a predominantly Black neighborhood cut off economically from local resources, the community was nearly erased after being razed as part of an urban renewal project. Executive Director of Piedmont Housing Alliance, Sunshine Mathon, offered that,

“A resident once said, ‘If you’re born poor in Charlottesville, you die poor in Charlottesville.’ Notwithstanding the end of Jim Crow, the Civil Rights Acts, and myriad anti-poverty measures, these inequities have only grown.  The heart of our work at Friendship Court is collaboration with the experts in surviving the country’s racist housing system: elected resident-representatives of Friendship Court, a 43-year-old Section 8 community developed as a 12-acre superblock of racialized poverty. Since 2017, they’ve co-led the redevelopment planning process in partnership with us and other design team members.”

The redevelopment project could not come at a better time. Housing costs in Charlottesville and Albemarle County have grown to become heavily burdensome, with 9,000 renter households paying more than 30 percent of their income, the accepted standard of affordability set by the U.S. Department of Housing and Urban Development. Rent costs in major apartment complexes in the Charlottesville urban area grew 5.8 percent annually over the last two years and four percent every year since 2012, averaging $1,321 paid per month.

To address the burden of rising housing costs relative to income, Piedmont Housing Alliance inclusively designed the project with an income-tiered payment scale. With the first set of homes becoming available in 2023, a total of 106 affordable homes will be built, made up of:

Both townhomes and multifamily units will be offered, along with a modern community center, a recreation space, a one-acre-sized community garden, and an affordable, high-quality early learning center for children aged up to five years old. These offerings are in addition to a wide variety of educational programs and services available to residents, including courses on financial management and preparation for homeownership.

Throughout every part of the planning process, Piedmont Housing Alliance collaborated with the Friendship Court Advisory Committee, a representational body of nine resident members elected by their neighbors and six members from the broader Charlottesville community to plan and develop their future homes. Regular meetings with opportunities to voice feedback guided planning for the community’s transformation. During the redesign process, residents gave important perspectives and insights into community life. They identified employment accessibility and connection with the wider community in Charlottesville to be priorities for the future.

Beyond the guiding principles of ongoing resident engagement, tiers of affordability, and programs beyond housing, all partners working on the project agreed to a zero-displacement policy for existing residents. As a result, no one will be asked to relocate during construction or afterward, as the first phase of redevelopment will take place on vacant property. Once the first homes are constructed, existing residents will move in, and future phases will follow. According to Loan Officer Corbin Anderson of VCC, “The creative and collaborative planning and execution of this project will be transformative for affordable housing in Charlottesville.”

The redevelopment construction began with a Groundbreaking Ceremony at the beginning of 2022. During closing remarks, Community Liaison and former resident Myrtle Houchens shared her vision for Friendship Court. She said, “We dug into the soil for a foundation for housing… I want us to build the foundation of a community of love. Of respect for one another. A community that cares about one another. That’s my hope and my dream.” The shared dreams of the families at Friendship Court bind the community together as a new chapter begins.

As Piedmont Housing Alliance reflected, “Though rebuilding this community cannot alone address the full history of structural racism and other systemized inequities, the work of redevelopment is fundamentally rooted in bending the arc of the future.” As these next steps are taken, we need more partners in the movement for increased housing affordability for Virginians. To learn more about Piedmont Housing Alliance, contact Lindsay Chamberlain or Sunshine Mathon. To connect with us about a project or idea on housing affordability, reach out to Corbin Anderson at Virginia Community Capital.