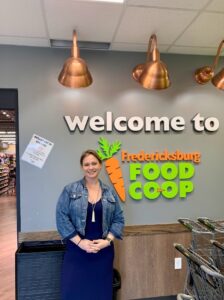 The Opportunity Virginia team began working with Rich in 2020 to assist with their capital raise and leveraging Opportunity Zone financing. Since then, The Fredericksburg Food Cooperative has celebrated several major milestones. Opportunity Virginia Market Manager, Cara Simpson (pictured left), sits down with Rich to learn more about the project’s progress, how other people can replicate the co-op’s success, and the impact OZ financing had closing out their capital raise. Click here to read the first interview with Rich from July of 2020.

What are some updates since our last conversation? Any major celebrations?

Rich: We officially opened our doors on April 1st, 2021. On opening day, there was a line of people waiting to get in. There was so much emotional satisfaction of having worked on something for five and a half years and then seeing it come to fruition, seeing the dream of a community-owned Food Co-op in Fredericksburg.

As a recap, can you remind us of what The Fredericksburg Food Co-Op is trying to do? I saw Seven Cooperative Principles posted inside your store. Beyond that, what is the vision that you follow?

We prioritize buying from local farmers and local producers, so that’s our first choice whenever we can buy from a local producer. It supports the local economy, and local just tastes better.

We center environmental sustainability in all our actions. For example, we do our best to minimize the use of plastic to eliminate it as much as possible. Our volunteers, even for years before we opened, made reusable tote bags out of T-shirts that were donated, and we’re still doing that once a month.

We are more than just a grocery store. We’re a place where people and ideas come together for the benefit of the community. We do a lot of classes, sharing information on the link between food and health: nutrition classes, cooking classes. We do classes on environmental issues like moving to zero waste. We do a book group every month. We have music, usually the first  and third  Thursday of every month, just because it’s fun. We do a gardening class the second Tuesday of every month. All our classes and events are free.* They’re a way of bringing people together.

Another thing we do for the community – we’re the only grocery store that offers a fresh match program. So, if you if you buy groceries at the Co-op with SNAP EBT you get 50% off on fruits and vegetables and coupons for 20% of your total purchase. It makes the SNAP EBT dollars go a lot further and provides an incentive for healthy eating. We also partner with the local food bank, farmers market, and the local university.

And of course, we want to do all that while being financially successful.

What advice to you have for communities interested in starting a Food Co-Op of their own?

You really have to have a group of volunteers with a multiyear focus – there’s just no two ways about that. It can’t happen overnight. We had to raise $4.3 million for this. And we needed to get over 1,000 member owners. So, you really need to be very focused. You need a long game perspective.

We basically followed the model created by The Food Co-Op Initiative.* Their website has great information, and they also do handholding for free, so they’re a wonderful resource.

Starting a food co-op is about building community support. When you hit certain milestones in the number of owners, certain activities are triggered: conducting a market study, finding a location, raising funds, hiring the general manager, things of that sort.

Virginia is growing food co-ops, but very slowly. There are only three in the state: Harrisonburg, Roanoke, and us. There’s another one starting in Lovettsville that will likely open in the next few years.

For smaller communities that might not be ready to support a co-op store, a cooperative buying club is also an option.

You’ve made it clear that gaining community support, particularly through ownership is key to the Co-Op’s success. Can you talk more about that?

Being a co-op owner is about more than just the legal ownership. It’s being part of something bigger than us as individuals to accomplish something no one could do alone.

Someone might refer to me as the guy who started the Co-op. But that’s just not true. It’s the community that came together and it’s about all of us. So, seeing that happening, seeing the community coming together around the Co-op, meeting each other, exchanging ideas around values and goals – it’s just really cool.

What the future of the co-op? 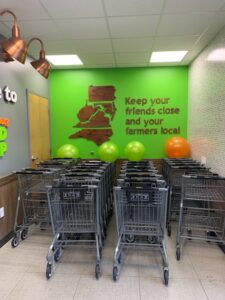 We’ve just been open a year, so we need to keep ramping up our sales and hitting our targets on what we call our ends – those four values I mentioned before: local, community, environment and being financially successful. So, ramping up from 15% local products to closer to 50% local – that’s very ambitious, but we are continuing to move in that direction. We have a sustainability advisory committee always looking at how we can improve in terms of reducing our footprint on the environment. We hold a lot of events, but there’s always more we can do for the community.

Financially, a new business is rarely profitable in year one. But our bottom line is better than we projected. It’s exciting that we’re where we need to be from a from the standpoint of being able to be sustainable.

Tell me more about the capital raise and how OZ funding factored in?

So, our Co-op had to raise $4.3 million to open. When we started, we thought we could do it with $3.6 million, but costs went up. We thought we could get half the money from bank financing, but banks became more and more reluctant to lend to start up businesses.

In the end, we were very pleased to get a $1.4 million loan from the National Cooperative Bank, and to be the first and, so far, the only loan to a food co-op that’s been guaranteed by the Small Business Administration.

The rest of the money came from this community. At opening, we had more than $400,000 in equity from our 2,000+ owners. And the community really stepped up. About 300 of our owners provided another $2.2 million through 15-year loans, subordinate to bank debt.

In 2020, due to rising costs and other circumstances, we realized we needed to raise an additional $750,000. So, we went back to our owners, and we launched another owner loan campaign. That’s when we learned about the Opportunity Zone program. I reached out to Jay Beekman at Opportunity Virginia (OVA). He was extremely helpful and guided us as we put together our own OZ fund with the law firm Dulcie Whitney.

The local paper, The Freelance Star, published an article that generated interest in that OZ fund and in the co-op. We held meetings in the community and on Zoom that Jay joined and we ended up raising an additional $780,000.

How much of that came in the form of OZ fund units?

$93,000 came directly from the sale of units in our OZ fund. That fund facilitated another $145,000 in preferred stock, and also prompted some to make loans to the co-op.

So, even though the OZ funding was a smaller component in dollar amount, it was a critical piece of our capital raise. There were individuals that were interested in the OZ fund initially who ultimately opted to invest by making a 15-year loan to the Co-op.

The OZ fund didn’t happen in isolation; it was part of the whole mosaic of how we raised capital. We were basically looking at any way possible to raise the necessary funds.

How did the local community provide support though this process?

Our local economic development authority and our City Council was helpful to us. Though the City of Fredericksburg didn’t give us any upfront money, they provided a tax abatement. We pay sales tax like every grocery store, and the City of Fredericksburg is rebating back their portion to us for the first five years, and half that portion the next five years. The whole City Council voted unanimously to approve this tax abatement.

And our mayor, Mary Katherine Greenlaw, has been very supportive. She spoke during our groundbreaking.

Final point I wanted to discuss: There is some proposed legislation around Opportunity Zones (insert link – summarize bill). Based on your experience utilizing OZ funding for the Co-Op, what are your thoughts?

Basically, I would agree with all the recommendations as you’ve described them. I haven’t read the legislation, but an extension would be good and would give more people a chance to participate.

For a project like ours – just being totally honest about it – a greater need would be to have some softer money. Whether it’s lower interest rates, grant money, some combination of those. If there could be a program that included some combination of grant money with OZ money, that would make it much more compelling.

Because right now, the rate we’re paying for the preferred stock from the OZ fund makes it our most expensive capital. We’re paying 6%, and when I was talking to OZ funds to see if they would invest in us, I was talking about our return being 6% with no upside. They kind of just sneezed at it and said, “Well, 6% is not a real return.” We aren’t a national franchise like some name-brand hotel, and they just weren’t interested.

6% might be low in the OZ world, but to make a community project like a food co-op happen, it’s expensive capital.

And I think I think that is an important point. OZ funding, at least in its current form, couldn’t be a main source of funding. What made your raise a success was that “whatever it takes” attitude looking for all options on the table.

For more information on Opportunity Zone funding, visit the Virginia Department of Housing and Community Development website at https://www.dhcd.virginia.gov/opportunity-zones-oz or send an email to [email protected].