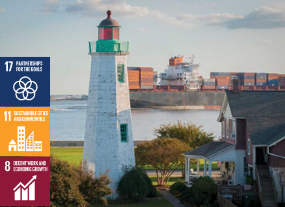 Designated a National Historic Landmark District and listed on the National Register of Historic Places and the Virginia Landmarks Register, Fort Monroe is evolving from a decommissioned U.S. Army Base to a richly diverse destination site. Fort Monroe is located in Hampton, Va., where the mouth of Chesapeake Bay meets the James River. It includes a vast array of facilities including a museum, park and recreation areas, and seven miles of shoreline.

More than 400 years of compelling events occurred here: England’s early exploration of the new world and the confluence of three cultures (European, American Indian and African); four centuries of military defense of Chesapeake Bay; and, most notably, the place where America’s institution of slavery began and ended. Fort Monroe was recently center stage for the launch of 2019 American Evolution – a yearlong commemoration of the 400th anniversary of the landing of the first Africans to these shores, the first women and the first representative government. President Barack Obama proclaimed the site a National Monument.

Like many other cultural and historic models, Fort Monroe is primarily owned by the Commonwealth of Virginia, in collaboration with the National Park Service and a range of municipal, cultural and educational partners under formal agreements. Fort Monroe Foundation is the private 501(c)3 entity that builds awareness and philanthropic support.

Today, Fort Monroe provides a range of educational programs, tours of the site and the Casemate, and cultural events that serve more than 100,000 visitors a year. Fort Monroe is also continuing its preservation and re-adaptation of facilities for residential, commercial and public use.

Recently, more than $9.7 million was needed to create the 16,700-square-foot Fort Monroe Visitor and Education Center, with $8.7 million of that committed by the Commonwealth and National Park Service. The Foundation committed to raise the balance $1 million. At the time of the loan application, the Foundation had raised more than $1 million, but $750,000 was in multi-year pledge payments.

Providing a $250,000 bridge line of credit to the Fort Monroe Foundation would help the construction project move forward as the Foundation continued to receive pledge payments. Virginia Community Capital realized that solving this timing gap with a targeted loan would help keep an important regional effort on track and meet its anticipated completion. 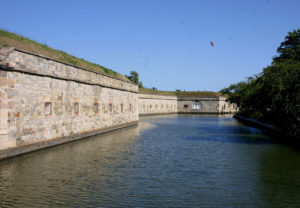 The creation of the Fort Monroe Visitor and Education Center stands as a starting point for Virginians and other visitors to learn more about the history and significance of this former military fort, which today serves as a catalyst for continued revitalization and redevelopment in Hampton Roads. The project brings together government, private, and public support.

During the launch of the 2019 American Evolution commemoration in August, visitors were treated to a preview of the facility and exhibits, which will present different periods of the fort’s story and the region, beginning with the early 1600s to the present. In addition, the public will have access to important archives, oral histories and other amenities of the structure.