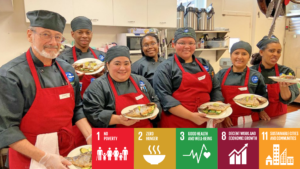 In 2012, Patricia “Paty” Funegra founded La Cocina VA, to combat unemployment, hunger, obesity, and food waste in the Washington, D.C. metro area. Paty founded La Cocina after a nearly 20-year career in international development with multilateral organizations that supported efforts in Latin American and Caribbean countries. Through the area’s only bilingual culinary job-training program, she is empowering diversity groups and immigrants to be agents of social and economic change. The program offers vocational and technical training for culinary careers.

The results are impressive. According to the organization’s 2017 impact report, La Cocina – which is Spanish for “the kitchen” – has more than 100 graduates with an 85 percent job placement rate and a one-year retention rate of 78 percent. Those workers are earning an average hourly rate of $13.50.

At the same time, La Cocina provided more than 21,000 residents with healthy meals and recovered 17,000 pounds of food that would otherwise have been wasted.

The program has been so successful that La Cocina has outgrown its existing rent-free donated space and will be moving to a new 5,000-square-foot venue on Columbia Pike in Arlington. The new facility is in a neighborhood where 37 percent of the residents are food insecure, enabling La Cocina to expand its outreach with rentable kitchen space, catering services, and a café that will help support daily operations.

Already, Paty and her board – which includes national leaders in foodservice and government – have raised $1.9 million toward the $2.5 million needed for construction.

While continuing to raise private donations to cover project costs, La Cocina wanted to move forward with construction for the new facility. VCC is providing a $300,000 line of credit. The line of credit leverages the Healthy Food Fund Initiative, which supports projects that directly impact food insecurity. Once in the new space, La Cocina will be eligible to apply for larger grants from foundations that already support this work, as well as partner with corporations for training and corporate catering.

La Cocina has demonstrated its value to the community, which is underscored by its continued fundraising success. By moving to a larger facility, La Cocina is strategically expanding its impact with workforce development, community revitalization, and support for minority groups, particularly the large Hispanic population in this area. The organization will help fuel economic growth as residents can tap into its six rental kitchens for food entrepreneurship, in addition to continuing to provide access to healthy foods in a disadvantaged community. The rental kitchens will offer reduced hourly rates for low-income individuals.

Once in the new space, La Cocina expects to double its outreach, with donations of healthy food to exceed 40,000 annually. The expanded culinary training is projected to produce 100 graduates each year, with a 95 percent placement rate. Catering services will require at least a four-person full-time staff, which includes apprentices paid by a Department of Labor grant.

La Cocina also reports that 95 percent of its clients are women, which aligns with VCC’s commitment to supporting women-owned businesses.