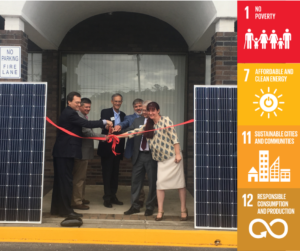 For the next 25 years, Goodwill store managers in Salem, Va., will need to look no further than the roof – and sky – for electricity to power the retail location. RER Energy Group, a regional leader in renewable energy, saw an opportunity to install a solar system on top of the building. Rather than owning the system, Goodwill will purchase the electricity it produces – leading to more than $135,000 in utility cost savings over the lifespan of the solar system.

Founded in 2009 in Reading, Pa., RER Energy Group needed financing for the construction, which takes about six months.

The Goodwill store in Salem is part of Goodwill Industries of the Valley, headquartered in Roanoke. The store serves 31 counties and 13 cities. In 2017, the nonprofit employed nearly 1,000 people, including 800 people in its 39 stores, and served nearly 45,000 people.

RER Energy Group develops and sells solar energy systems, principally in the Northeast. Since 2010, RER has developed 66 solar projects totaling 32 megawatts, with a pipeline of 24 new projects that will bring 26 additional megawatts of solar energy. Solar Power World magazine has named RER among the country’s top 24 solar developers. The company has also assisted its customers in securing more than $30 million in state and federal grants.

Solar energy accounted for the largest percentage increase by non-hydro renewable energy last year, according to the U.S. Energy Information Administration. Solar power is renewable and does not generate pollution. VCC also recognized that this approach would help Goodwill reduce its operating costs, allowing it to invest those funds in mission-driven work. VCC provided RER Energy with a $260,000 construction and permanent loan.

The solar panels will help a vital community partner save operating costs, as it continues to provide discounted retail services. As a renewable energy source, the system will reduce local greenhouse gas emissions.

The project also supports local economic development, as RER will contract for the installation with G.J. Hopkins, a Roanoke-based electrical and mechanical company with more than 50 years of experience.