Restoring natural areas in Henry County for recreation and conservation 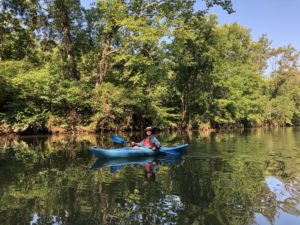 After an affordable housing conference, I spent the morning on the Smith River of Martinsville – Henry County near the North Carolina border in southern VA with Brian Williams, placemaker and river protector. The Smith is known for its native brown trout fishery, supported by the cold water released for power generation at Philpott Dam. Though I thought I was just getting a river guide, Brian happened to be one of the area’s spark plug leaders who works tirelessly to champion community development. He is the driving force behind installing river put-ins, rails-to-trails, and nature preserves that create access to natural areas for recreation. 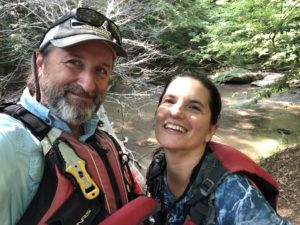 Brian speaks with the soft drawl of his native Tennessee dialect. He notes that it often takes an outsider to see a place’s potential. He arrived to town 15 years ago about the time the furniture companies were in decline and chemical pollution of the river was on the wane. There were no river access points. The community did not see the river as a resource, but a place where furniture makers dumped dyes and where residents could dump trash. People used to drive their Jeeps and pickup trucks into Eggelson Falls. One cleanup effort early on yielded 15 tons of trash, including tires and refrigerators. Behavior and attitudes have slowly changed through a combination of education, enforcement, and fines.

People will not care about conservation unless they experience and use natural areas for recreation. Restoring natural areas for recreation can create tourism that drives economic revitalization. Brian says his main role is getting people to love the river so they will take care of it. His efforts have created a broader regional sense of place centered on the river among local people who historically identified with their individual small towns, which has motivated people to work together.