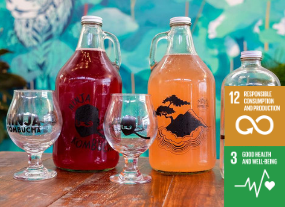 Brett Nobile was looking for a healthy alternative to the hops and barley of beer when he came across kombucha, a sparkling living tea drink popular for its probiotic health benefits.

Nobile began drinking kombucha on a regular basis, and decided to start brewing his own batches to save cash. A brewer of beer for eight years, Brett realized a lot of the techniques between the two were similar. A few glass carboys and symbiotic cultures of bacteria and yeast later, Ninja Kombucha was born.

Starting at farmers’ markets in Richmond and Williamsburg, Ninja Kombucha expanded to retailers such as Growlers to Go, as well as some local breweries and boutique markets. They currently operate out of Create Space, a small, shared, nonprofit facility in Richmond’s Northside. But as its business grew, Ninja needed more room to brew, package, and cold-store its batches.

VCC supported Ninja with a $128,000 loan to help fund its transition to a new 2,000 sq. ft. facility at 126 W. Brookland Park Boulevard in Richmond’s Northside. The new warehouse has 200 sq. ft. of cold storage space and more room for production, as well as a retail storefront to sell growlers of its traditionally fermented flavors, such as Shinobi (lemon and ginger) and Oniwaban (blackberry and hibiscus). The loan will go toward improvements, new equipment, and working capital, plus closing costs to lease the new space.

Ninja Kombucha is dedicated to supporting and partnering with other local, small businesses to foster a community of motivated artisans in Brookland Park, a Northside Richmond neighborhood in the midst of revitalization. Although Richmond is already a destination for beer brewers, Ninja is putting Brookland Park on the map as one of the first local kombucha brewing companies in Richmond. Nobile is lining up additional retailers from Williamsburg to Fredericksburg, moves anticipated to grow the company’s revenue. He’s also building stable jobs, converting a few of Ninja’s contracted workers into part-time employees.

In addition to supporting artisans and small businesses in the community, Ninja is encouraging healthy living, too. Kombucha is said to have positive probiotic health benefits such as improving gut and liver function, lowering risk for conditions such as heart disease and cancer, and improving mental performance. Ninja’s mission of bringing locally-sourced, maker-focused business to Brookland Park will steer the community towards a more cohesive, healthy, and vibrant way of life.