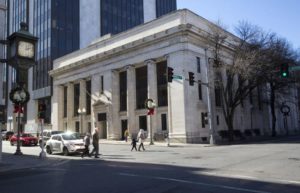 “This purchase was an opportunity for Carilion to add space downtown while directly benefiting our community,” said Don Halliwill, executive vice president and chief financial officer for Carilion Clinic. “We get a beautiful building; the community gets the commitment from VCC that the money we paid for the property will be reinvested in Roanoke.”

The iconic 55,000 square foot building, located at the corner of Jefferson and Campbell avenues, was donated by Wells Fargo – which used the building as a bank branch – to VCC in December 2017. The purchase of this building continues to build momentum for downtown redevelopment, following on the heels of the Campbell Court announcement last week and, in August 2018, the announced redevelopment of the Heironimus building.

Carilion purchased the building for $500,000. Those proceeds will be reinvested in the Roanoke region to promote further economic opportunity and quality of life initiatives. 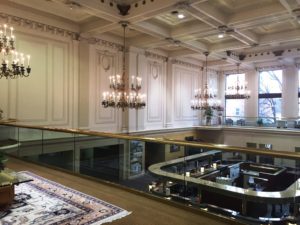 “We are honored to have been the trusted stewards of this donation from Wells Fargo, and we are excited to find a buyer that shares our commitment to helping build Roanoke’s future,” said VCC President and CEO Jane Henderson. “This is yet another illustration of the growing momentum in downtown Roanoke – and throughout the region.”

VCC began engaging the community early last year by inviting community members to join facilitated conversations to share ideas for the building, offer insights on economic development needs, and discuss other ideas for the Roanoke area.

“VCC does not traditionally hold real estate assets like the bank building,” offered Henderson. “However, this gift from Wells Fargo provided a unique opportunity for us to innovate and support economic and community development by leveraging existing community assets and engaging directly with the community.”

The age of the building, its historic Greek Revival architecture and its renovation needs complicated the process of finding the right buyer. In the end, three proposals were received; one was determined to be practical and viable.

With a history of finding unique ways to match existing buildings with the needs of the community, Roanoke-area developer Ed Walker wanted to assist VCC in finding the right solution for the old bank building. He spent 2018 assessing potential plans.

In mid-December, Walker asked if Carilion would be interested in purchasing the property.

“It’s no secret that renovating older, historic buildings is not an easy task,” said Walker. “It’s a testament to our community spirit that organizations like VCC and Carilion Clinic are willing to play a role in honoring our past while continuing to create a bright future.”

As one of the region’s largest economic contributors, Carilion was a natural fit. VCC chose to sell the property to Carilion because of its strong track record of supporting the community, its innovative use of other historic buildings, and its reputation in western Virginia.

Carilion has had an important stake in the bank building for many years. The building’s neighbor on Jefferson is the Carilion Administrative Services Building. The two buildings share a common wall and some building systems.

With the completion of the sale, Carilion will further evaluate renovation needs in the building along with its own office space needs. Plans for its use are still under consideration.

VCC will soon re-engage with community members and other stakeholders in Roanoke on the most optimal use of the sale proceeds, with the ultimate goal of fostering economic development in the Roanoke region.