Home / News / A New Purpose for an Old Building

A New Purpose for an Old Building 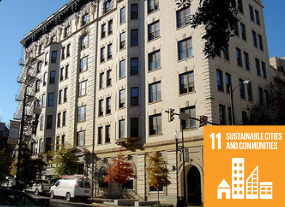 At the corner of Ninth and Main streets sits a spectacularly built gem in the heart of historic downtown Lynchburg. The six-story Krise building, erected in 1905, was constructed as the city’s first “skyscraper,” with a bank on its first floor and offices above. Over a century later, the Krise is being morphed into 21 apartments: eight one-bedrooms, 11 two-bedrooms, and two three-bedrooms. The Krise will also include four retail spaces on the ground floor and two penthouses on the top.

Krise overlooks notable local landmarks such as Monument Terrace, the James River, and the former Lynchburg National Bank building. With large windows that promise an abundance of natural light, plus modern amenities and premium finishes, the project will showcase contemporary design in a building flaunting classic Virginia charm. Construction began this summer, lofts should be available to rent in late 2019.

The Krise’s renovations came at an opportune time for Lynchburg, a town of more than 80,000 people that is in something of a renaissance, demand is rising for homes and businesses in the historic downtown area. The Virginian Hotel opened this year after renovations, which added a rooftop bar and a steakhouse. The Academy of Music Theatre on Main Street is also scheduled to re-open this fall after extensive renovations last year. Lynchburg is becoming a tiny rural metropolis, and projects like the Krise are putting the city on the map as a great place to live, work, play, and visit. The Krise’s downstairs retail spaces are seeking to attract high-end commercial and retail units, which will add more value to the homes above.

VCC has long been active in Lynchburg, for example, helping finance development of the Craddock Terry Hotel out of a former world-renowned shoe factory, and assisting local meat-processing company Seven Hills Food Co. with financing to help grow.

Part of VCC’s interest and commitment to the project was not just on paper, but in people: Krise Partners LLC include Cliff Harrison, Wayne Martin, and Samuel Omotoye. Harrison owns a construction management firm and has a strong relationship with VCC; he was involved in the Craddock Terry development and the Bluffwalk Center, of which the hotel is part. Martin; he founded an institute dedicated to providing Spanish and European studies to university students, but remains active in Lynchburg and was involved in the Craddock Terry development. Omotoye is a Lynchburg cardiologist and moved to the area three years ago, and devoted himself to helping revitalize and redevelop in the city.

We look forward to seeing the new life they will further inject to this historic and important Virginia city.